Being an ever-smiley baby has its disadvantages.  Ian’s earliest memory as a baby was getting tossed in the air by an uncle (incident verified more recently).  As he choked and gasped for air, he remembers hearing, “Look, he’s laughing!”

There was an awkward beat, helplessly anticipating the inevitable:  He was tossed again.

2 lessons: (i) 6 month-old babies can understand English. (ii) Less tossing occurs when one is able to communicate effectively.

Henceforth, that incident served as a call to action, and Ian’s journey of communication began with cartooning for the Straits Times as a student.  This lead to more comics over the years, such as “Theophilus” and “The Puns” in the Sunday Times and The New Paper. Communication became a priority.  Perhaps seeing the world upside-down inspired him to be an artist.  Eleanor Davis sums up this calling in a memorable quote – “Maybe really good artists just expand their definition of “me.” Serving in the creative media industry as a cartoonist, multimedia creator and animator has made him see himself in everyone.  In a construction worker.  In an autistic boy.  In Johnny T.

According to Johnny T,  never be too proud to “Get out of the way”.  This is relevant to media directors & producers – don’t get in the way of good creativity. 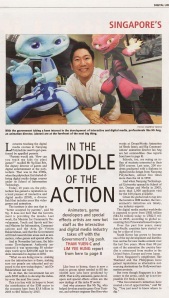 After years of uplifting experiences playing key roles in new media, advertising and animation, balanced with volunteer work over weekends, the latest chapter of Ian’s mission is to galvanize creatives to do what they do best – use traditional and new media communications together with entertainment channels – for a cause: understanding those who are born with special needs such as autism, Down Syndrome, cerebral palsy, ADHD, etc.

Ian’s work is now broadcast around the world, in many cool sounding languages.